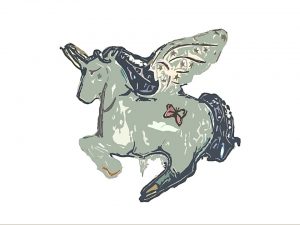 What was once a myth and rarity is now an everyday story. ‘Unicorns’ are private startups whose valuations have reached $ 1 billion +. Reading out the mythological background of the unicorn out of curiosity, the King of Ethiopia claimed that “it is impossible to take this ferocious beast alive; and that all its strength lies in its horn. When it finds itself pursued and in danger of capture, it throws itself from a precipice, and turns so aptly in falling, that it receives all the shock upon the horn, and so escapes safe and sound”.

I’d call the horn of the unicorn the funding received from Venture Capital firms and Private Equity, where all its strengths lie and which saves it from crashing when falling down. It may seem like a negative assumption but it’s not. Money and liquidity create value and they are necessary to create disruption, we just have to assess which companies and deals create positive disruption and which ones negative disruption. The goal is to create a company that can eventually thrive and stay alive without its horn, or the enormous cash injections. Many of these startups survive on large losses for years and years only thanks to the availability of cash.

I’m not going to argue here about whether there is a bubble or not, you’d have to look into every startup and determine whether they are overvalued or undervalued, as well as consider that every valuation is also determined by many variables including the rights attached to the investors’ shares.

The term ‘unicorn’ for startups was first coined by Aileen Lee in 2013. The massive increase in billion dollar startups is also due to changes in the early-stage financing markets: the push for fast-growth, the availability of VC and PE finance that allow companies to raise large amounts of cash without the hassle of going though an IPO, and the willingness of these investors to finance them at high valuations. I also believe that investors are able to finance them at high valuations because of the power that many of them can exercise during a liquidity event, which in the case of unicorns can often be an IPO, or sometimes an exit by market-leading companies.

However, finance is not the only reason. Technological advances are becoming faster and the expansion possibilities of companies are therefore multiplied. The internet has created completely new business models that weren’t conceivable before, allowing them to scale at massively fast rates, decrease prices thanks to economies of scale and by putting growth before profits. Globalisation trends such as a mobile workforce, the opening of global financial markets and corporate deals, as well as the immediacy of communication all help increase the scalability of these startups.

Many of these unicorn valuations depend on a story. Facebook and its success may still fuel the hopes of current tech startups, and how the first famous tech unicorn, and the ones that came after it, will keep developing will likely influence current valuations as well. That’s because at the moment, for some business models, growth almost seems to have no limits. At the same time, this feeds higher entry barriers, as growth fuelled by capital and availability of the latest technology has become a pre-requisite to even operate in some markets, pushing up valuations and growth projections.

It’s also difficult to speak of failure, because once you are able to raise funding rounds of hundreds of millions or more, you can acquire a variety of companies that in turn push up the company’s value, and create synergies with the current core business and increase the value even further. These past unicorns, in effect, can even become an investment vehicle over time, just like many tech giants such as Amazon, Alphabet, Alibaba, Uber, Facebook, Salesforce and many others are now maintaining their leadership by investing in all new potentially relevant technologies, and often setting up separate Corporate VCs to do so.

Synergies can be created with acquired companies in a variety of ways: by selling more products to the current customer base, by expanding the sales channels, by achieving market leaderships and buying up competitors, by enhancing brand recognition, fuelling the creation of new technology and know-how by sharing expertise, and also economies of scale, which however is not usually a motivator for early-stage exits.

The hype of some tech sectors certainly play a role in the overvaluation of early-stage startups, but these may last for a few years, as the fast pace of technology also means that hypes quickly move on to the next big thing, and mostly create positive returns from early-stage exits. However, the popularity of some startups, despite their losses, and the backing of investors make it easier for these companies to keep raising money, from the same or new investors, as in the former case the best way not to lose money on previous investments is to keep the fire alive until a liquidity event can take place. Creating unicorns or pushing for early-stage exits has become a business model by VCs, but there isn’t much to criticise, as VCs are also disruptive businesses that can create great successes. Entrepreneurs are in a way complicit of this, as they can be attracted to the startup culture and lifestyle, and want to take part thanks to the availability of capital and the VC’s ability to help them achieve early-stage exits, sometimes even starting out with sub-standards ideas and products.

The way that seed and early-stage VC portfolios are structured also leave little room for companies without unicorn potential. If you have a portfolio of 10 companies, and according to some statistics 6-7 will fail, while 2-3 may just about return the initial investment or a little more, then you need 1 company that will exceed all expectations, and you’ll want to use all resources at your disposal to ensure that that company provides the highest possible return. The risk of failure is so high at this stage for any company with little or no traction, that as an entrepreneur you need to present a very high upside to investors. Whereas investing in potential market leaders will always take precedence at this stage due to the inherent risk, I wonder whether increasing our ability to recognise some bad investments from the very early-stages, will leave more room for strong but less scalable startups.

So where do unicorns come from? First, it’s the product of a pursuit of growth, and we know how to create growth in one sector by disrupting another sector. Unicorns are created by a cycle of availability of finance, avoidance of regulations, technology change and fast adoption, VC power and negotiation practices, the use of imprecise valuation approaches or sometimes inexistent math, synergistic acquisitions, scalability, popular startup culture, the story of successes of other tech giants, the availability of talent, increasing entry barriers and the makeup of a startup portfolio. All these trends are fuelling each other. If one of these step in the assembly line in the unicorn factory fails, maybe you can just replace a part of the assembly line with a new piece: it is certainly not an easy business, but many VCs are constantly adapting their business models and their current focus to changing trends in the market.

The possibilities of unicorns during the first growth phase look almost infinite, as there are countless strategies to be applied in the future, a variety of revenue models possible and high hope of continuous technology changes to fuel the growth and future possibilities, as long as all this keeps being true. The fact that we just do not know what the next big thing is going to be, also creates unicorns through this very idea of having countless possibilities. Despite the pessimistic reports of some experts predicting that the bubble will burst, this hasn’t happened yet. There will certainly be ups and downs, but unless the fast technological changes stop, the cycle may continue, as new growth can be created in many ways. There will likely be some large unicorns that will fail and lead to more cautious investing and generally lower valuations. I doubt that the current large financing rounds can continue as they are. However, creating unicorns is part of VC’s disruptive business model, so unless some other catastrophic event takes place to change market dynamics, this cycle is likely to change when new financing methods and investment trends will disrupt the VC market.

How can we explain the unicorn valuations?